The Kalbarri Skywalk ‘Kaju Yatka’ is located at the highest point, 110m, above the Murchison River in the Kalbarri National Park in Western Australia. The project was the winning story on Season 5 of Australia ByDesign.

The two structures cantilever 25m and 15m out over the gorge providing stunning views up and down the river and back onto the formations of the gorge face. The project was born after a meeting on site with Department of Biodiversity, Conservation and Attractions (DBCA) Project Manager Rory Chapple and Architect Craig Poletti. The lookout at Westloop (where structures are now located) was very minimal and upgrades to Nature’s Window further down the gorge had been completed so a project that would become a drawcard and help share the tourist load was needed. Initial sketches of a 10m cantilever structure created much interest and this became the driver to provide something bigger and better. The structures are a connection of the path leading from the carpark meandering through the landscape, providing sneak peaks of what’s to come. The ‘Beemarra’ (the Serpent Spirit of Water who according to local Aboriginal traditions, created the rivers) is cast into the path as artwork provided by local Nanda Artists, the path extends out over the gorge and back, inspiring the form of the Skywalk. Materials used needed to be raw to reflect the materials in the landscape. Functionality and low maintenance was also critical. The use of weathering steel was a perfect choice. Foundations for the structure were cut into the rock with all rock that was removed then used in the landscaping. The built facilities (infrastructure) – Kiosk, Shelters and Toilets borrowed forms from the Skywalk with large cantilevered box beams providing uninterrupted views over the gorges and river. Material pallet for buildings is again raw with weathering steel, pre-finished fibre cement, concrete and stone. All selected to minimise maintenance and harmonise with the environment. 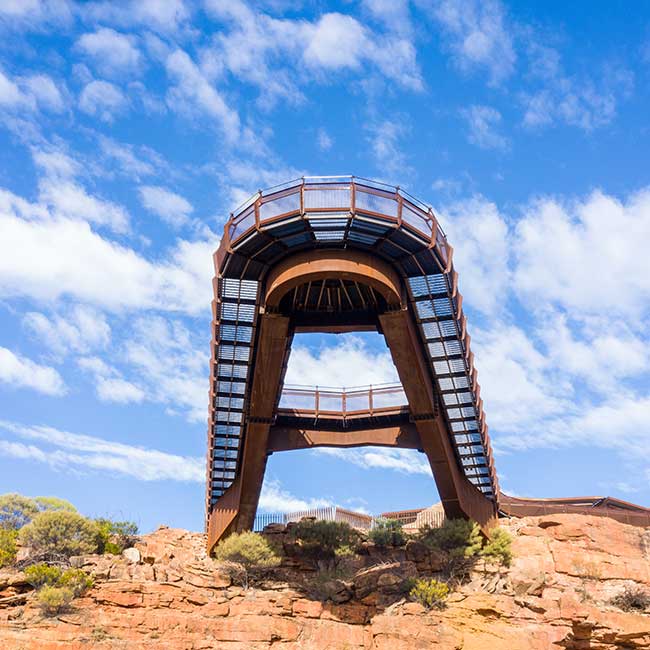